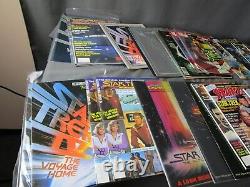 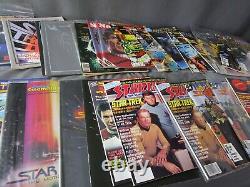 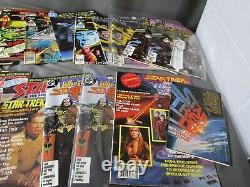 From the estate of a superfan collector who took very good care of his collection. This lot is chock full of items. February 1980 issue of American Cinematographer looks behind the scenes of 1979 Star Trek The Motion Picture. Most items measure approximately 8½x11¾.

The duplicates are stored in vinyl or plastic covers. Carefully stored in a manilla envelope in a controlled climate in a pet-free and smoke-free home. See body of listing for list of items included. 2 Star Trek IV The Voyage Home Advance folders. One has a bit of finger wear at the front bottom.

1 DC Comics Movie Special Star Trek III: The Search For Spock 1984. 3 Marvel Comics Star Trek The Motion Picture. Issues; 1 April, 2 May, 3 June. 1 American Cinematographer February 1980 Star Trek Motion Picture Look Behind Scenes. There is a one-inch tear on the back cover where I tried to take it out of its vinyl cover.

This item is in the category "Entertainment Memorabilia\Movie Memorabilia\Posters\Originals-United States\1980-89". The seller is "akachuck" and is located in this country: US. This item can be shipped worldwide.