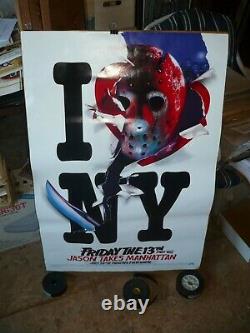 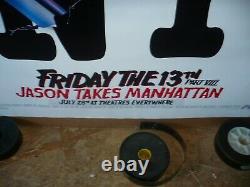 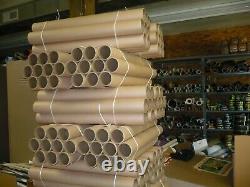 In this manner, I deliberately avoided acquiring bootlegs or reproductions. FYI, most one sheets made prior to 1990 are 27x41; most after this date are 27x40. Offered is an original advance one sheet (27x40).

This rolled single sided poster has minimal wear. All sales are fully guaranteed. This film was originally scheduled to be released on Friday the 13th in August 1991. It was decided, however, to release the poster earlier and dater snipes were issued to all Paramount field offices. This offered poster has the dater snipe on it.

An additional printing was made without the dater snipe. All of this effort went to waste because, at that time in the summer of 1991, the city of New York had a publicity campaign which promoted the city through the use of smiley buttons which stated, I Love NYC! When this poster was released, NYC objected and the studio's first poster was eventually cancelled.

This item is in the category "Entertainment Memorabilia\Movie Memorabilia\Posters\Originals-United States\1980-89". The seller is "pict_res" and is located in this country: US. This item can be shipped worldwide.