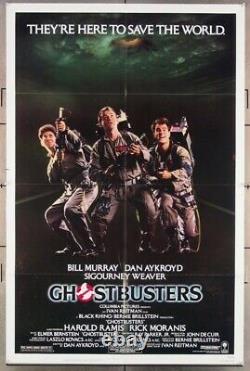 Columbia Pictures Original One Sheet Poster (27x41). Very few movies get this distinction: there is no other film like GHOST BUSTERS. Even its own sequel suffers from trying too hard to match the original. GHOSTBUSTERS is a huge pop hit, cult classic, and legitimate comedy thriller in one, and even more impressive, it is worth the hype. GHOSTBUSTERS is a lot more than a crossed out cartoon spirit (As recognizable as Coca Cola at this point) and a novelty song by Ray Parker Jr.

Sure, there are kids' toys and animated Saturday morning series featuring Slimer, but this film is for adults. Actually scary and actually hilarious, GHOSTBUSTERS is a team of great comedians taking the odd passion of Dan Aykroyd and turning it into a pointed satire of New York with an engaging plot. This film is arguably the highlight of several careers, including Ivan Reitman and Harold Ramis.

Sadly, according to Ramis himself, it is the bygone era when he and Murray worked well together before having a hideous falling out during GROUNDHOG DAY. Now Ramis has passed, Murray is ornery in a not fun way, and the much talked about GHOSTBUSTERS reboot will likely fall flat. But there is a reason GHOSTBUSTERS catch phrases persist to this day; it is a masterpiece of horror comedy. It is excusable (barely) if someone missed THE EVIL DEAd or hasn't gotten to SHAUN OF THE DEAD yet, but, culturally, no American is allowed to skip GHOSTBUSTERS. This one sheet is folded, as is typical of one sheets of the era. IVAN REITMAN - Director Bill Murray - Actor Dan Aykroyd - Actor HAROLD RAMIS - Actor Ernie Hudson - Actor Ron Jeremy - Actor Sigourney Weaver - Actor. Listing and template services provided by inkFrog. This item is in the category "Entertainment Memorabilia\Movie Memorabilia\Posters\Originals-United States\1980-89".