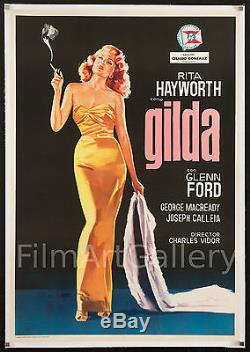 This classic film featured Rita's iconic performance of "Put the Blame on Mame" and it's her signature role. The film was first released in Spain in 1947, then re-released in the 1950's and re-released again in 1966 - the year of this poster. Poster measures 27 1/2" x 39 1/2" inches (linen border extends about 3/4 inch all around) and condition is excellent: originally issued folded, it has been beautifully linen-backed and is ready to frame. NOTE: PLEASE IGNORE THE MAGNETS IN THE CORNERS: THEY ARE USED DURING THE PHOTOGRAPHIC PROCESS AND AREN'T PUSHPINS, HOLES OR A DESIGN ELEMENT. PLEASE SEE OUR OTHER AUCTIONS AND STORE ITEMS FOR COOL MOVIE POSTERS.

It must come back in the same condition as it was sent. FILM/ART has one of the finest collections of original movie posters. The item "GILDA Stunning Rita Hayworth Spanish 1 Sheet poster linen-backed filmartgallery" is in sale since Tuesday, April 12, 2016.

This item is in the category "Entertainment Memorabilia\Movie Memorabilia\Posters\Originals-International\1940-49". The seller is "filmartgallery" and is located in Los Angeles, California.