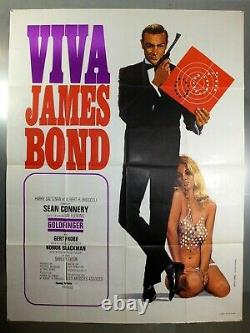 Light stamp bleed through to the J of the title and an original Studio snipe to the bottom centre credits. Payments must be received within.

(must clear before goods are released). Our Movie Posters and Lobby Cards are. As distributed by the film studios. The item "GOLDFINGER JAMES BOND / SEAN CONNERY ORIGINAL FRENCH GRANDE MOVIE POSTER" is in sale since Friday, February 7, 2020. This item is in the category "Films & TV\Film Memorabilia\Posters\Originals - Worldwide\1970s".