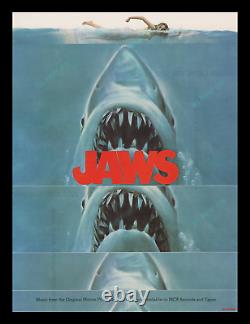 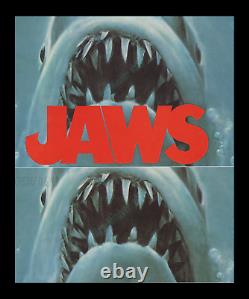 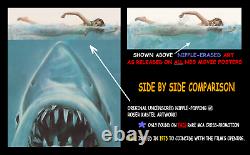 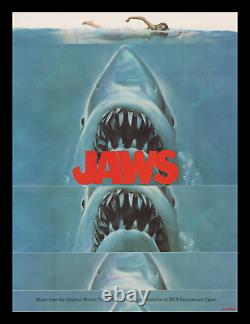 THE ULTIMATE 1970's HORROR POSTER! ORIGINAL 1975 JAWS POSTER ISSUED WITH THE. AT THE BEGINNING OF THE FILM'S OPENING IN THE SUMMER OF 1975! THIS IS ONE OF THE.

TOP 10 HORROR POSTERS OF ALL TIME! Up for sale is one of the most exciting and difficult posters to find that was released in the'70s. A 1975 PRE-CENSORED JAWS ADVERTISING POSTER ISSUED BY UNIVERSAL TO CROSS-PROMOTE THE MOVIE AND THE SOUNDTRACK! MCA records, a subsidiary of Universal Pictures, sent this poster to select record stores to coincide with the opening of the film and the release of the soundtrack. That soundtrack is one of the all time greats, contributing. Most effective element in the film that wasn't a. Subsequently, John Williams original musical score for Jaws has become recognized as one of the most innovative musical works ever created for cinema. That means it's RARE!

Unequivocally say that this poster is at least 1000x more scarce than the Jaws NSS one-sheets. Amazingly, the thrust of this soundtrack poster's design is on behalf of advertising just the film , not the soundtrack. The mention of the music is a very underplayed element on this ultra rare and unique teaser design. Interestingly, John Williams' name isn't even on this poster. In fact, you'll find John Williams name and a much bolder and BOXED treatment of the soundtrack availability text on the National Screen Service (NSS) posters that were sent to the movie theaters.

The "JAWS" title treatment on this special litho, right smack dab in the middle/center of the poster, is a welcome departure from the "uncentered" title treatment on the 1-sheets, which defocuses the attention away from the swimmer. Yet, the biggest design change comes from. The extra set of Jaws and the multiple sharks. Shown on the poster, as they add a much more dynamic (and scary) element to the lithograph, especially with the Great White shark so close to the NIPPLE-POPPING nude. The stacked image configurations - presented in multiple slices and tied together by the ocean blue - really give the viewer a sense of movement and power.

Also, the swimming figure at the top makes her only unaltered topless original 1975 poster appearance on this extra high quality lithograph, which is much tighter and sharper than the NSS posters (check out the side-by-side photo comparison in picture #3). Universal censored the nipples from "popping" on all of the other Jaws posters and movie advertisements released in the 1970s. The only other original promotional item that I've heard of that shows the pre-censored nipple-popping art is a very rare soundtrack advertising mobile that accompanied this poster to some of the record stores. Can you imagine if there was a prototype 1-sheet proof or teaser theatrical movie poster to surface that carried this identical image, design, and, rarity? It would sell for at least 25K.

This poster is smaller, measuring 18x24 inches, and so I've priced it accordingly lower. Also, as a point of interest; I did some research on Roger Kastel, the JAWS artist.

He now promotes himself and his career with the original UNCENSORED NIPPLE-POPPING. Painting used to make this poster. The condition of this beauty is a dream. SOLID NearMINT ROLLED NEVER-FOLDED ORIGINAL UNTOUCHED UNRESTORED CONDITION!

WATERMARKS HAVE BEEN DIGITALLY ADDED ONTO THE IMAGES TO PREVENT THE SCUM PIRATES FROM DOWNLOADING THE PHOTOS AND STEALING THEM FOR PUBLICATION IN BOOKS! IS THE FILM RESPONSIBLE FOR COINING THE PHRASE.

It can crash regardless of any decision you make and can even crash regardless of any decision made by the company related to the stock - Leaving you with a near worthless piece of paper that won't inspire anyone! The magnificence of art and historic documents have an inherent value that relates to civilization and society. Please write with any questions.

If you're in the market for top quality original vintage movie posters or Star Wars, then please. The item "JAWS 1975 UNIQUE TEASER MOVIE POSTER RARE Pre-Censored NIPPLE-POPPING ART" is in sale since Tuesday, July 14, 2020. This item is in the category "Entertainment Memorabilia\Movie Memorabilia\Posters\Originals-United States\1970-79".miniver" and is located in Studio City, California.