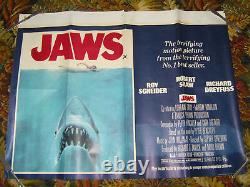 All folded posters have the film and/or cinema name written on the back in pen or pencil, but as shown in the photos, these do not affect the front. CONDITION - has a 2 cm paper loss at top middle, a small stain at white border top right, slight damage at top and bottom right corners, and several pinholes at corners and middle top. Most of these flaws are on the white top border so could be treated by trimming for display +++ A Very good example of an essential original film poster. The item "JAWS Original UK Crown Quad movie Poster 1975 SPIELBERG Film UK Seller" is in sale since Sunday, April 7, 2019. This item is in the category "DVDs, Films & TV\Film Memorabilia\Posters\Originals - UK Quads\1970s". The seller is "itoka" and is located in Swansea.