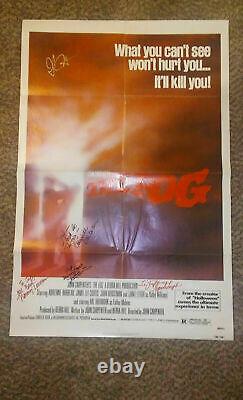 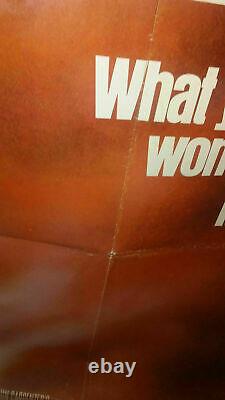 Would instantly become the centerpiece for any John Carpenter collection! If you don't want the inscriptions, there are restoration companies that will remove most inscriptions from movie posters such as Studio C. You can google them to find out more.

Thinning out my personal collection which I obtained in person through the years. 1 Original theater one sheet movie poster from 1980 (measures 27 x 41) for John Carpenter's The Fog autographed by six of the cast/crew including Janet Leigh and John Carpenter! I later obtained all the signatures from the celebrities in person. Sadly Janet Leigh is now deceased. The poster is only missing a signature from Jamie Lee Curtis and then you would have the entire main cast of the film!

Charles Cyphers - "Best Wishes Charles Cyphers" He signed it above the Janet Leigh Autograph. It has typical wear from theater use including creasing and some wear at center lines resulting in slight separation (tiny hole) in the center fold line as seen in the photo you can see white space behind the poster in the small center area. Not very noticeable and if you framed it, you would never know it.

You may have noticed it if I had not mentioned it so it's minor. Crease on the top right corner of the poster (just to the upper right of the word "see" on the poster).

There is roughly a 1 1/2 inch tear on the right side of the poster starting in the white border edge. The tear does not stand up as you see in the photo I'm holding it up for the photo so you can see it as the poster lays flat. Again, if you framed the poster, you likely wouldn't notice the tear on the poster edge - See photo. All wear on the poster is from it's original use in a movie theater.

The horizontal and vertical fold lines are normal for 27x41 folded posters that were sent to movie theaters by the movie studios as that it how they folded them. This is NOT a reproduction movie poster but a real one sheet movie poster that was used in a theater in the lobby to promote the film.

Please note: I pack professionally with bubble wrap and cardboard protection on each side of the poster so your item will be well protected in a proper size box. This item is in the category "Entertainment Memorabilia\Movie Memorabilia\Posters\Originals-United States\1980-89". The seller is "magichouratarea51" and is located in this country: US.