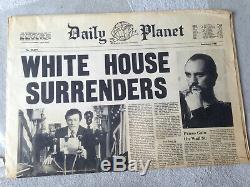 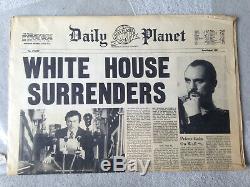 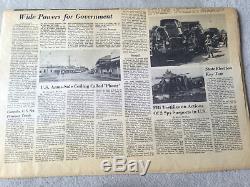 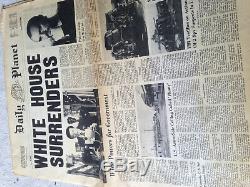 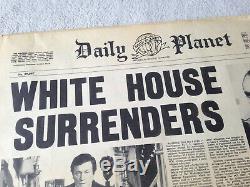 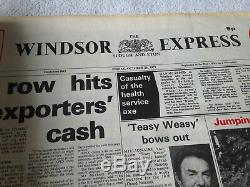 This poster is: SUPERMAN II. CONDITION: Good condition with no major tearing; paper has yellowed a little over time but again not to a serious extent; displays really well still. OTHER INFORMATION: These Daily Planet newspapers feature blowing down the road in Metropolis after General Zod took over the Whitehouse; it consists of a front cover printed specially for the film, glued to the front of an actual newspaper The Windsor Express, Windsor which is relatively local to where Superman II was filmed at Pinewood Studios. This of course makes it a lot easier to confirm it's authenticity with the date of the newspaper on the pages placing it in the correct timeframe; I have had this in my personal collection for some time but it's been stored away and deserves to be displayed; Christopher Reeve, Gene Hackman, Margot Kidder, Terence Stamp, Directed by Richard Lester, Jerry Siegel (characters). The item "Original Film Prop SUPERMAN II 1980 WHITEHOUSE SURRENDERS DAILY PLANET NEWSPAPER" is in sale since Friday, September 13, 2019.

This item is in the category "DVDs, Films & TV\Film Memorabilia\Posters\Originals - UK Quads\1980s". The seller is "favouritefilm" and is located in Basildon, Essex.