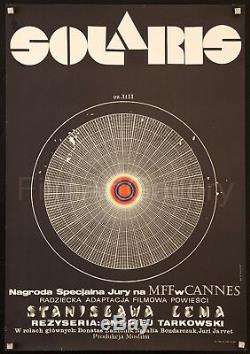 The film was co-written and directed by Tarkovski and is a meditative psychological drama occurring mostly aboard a space station orbiting the fictional planet Solaris. The scientific mission has stalled because the skeleton crew of three scientists have fallen into separate emotional crises.

Psychologist Kris Kelvin travels to the Solaris space station to evaluate the situation only to encounter the same mysterious phenomena as the others. Original posters for this film are in ever-increasing demand, and this is one of the most sought-after - featuring brilliant artwork by Andrzej Bertrandt. Size is 22 3/4" x 32 3/4" and condition is very fine: there are some micro tears along borders, minor creases and a patch of discoloration above the "S" of the title at upper left (it's not very distracting since the area is black). Really great shape - ready to frame!

NOTE: PLEASE IGNORE THE MAGNETS IN THE CORNERS: THEY ARE USED DURING THE PHOTOGRAPHIC PROCESS AND AREN'T PUSHPINS, HOLES OR A DESIGN ELEMENT. PLEASE SEE OUR OTHER AUCTIONS AND STORE ITEMS FOR COOL MOVIE POSTERS. It must come back in the same condition as it was sent. FILM/ART has one of the finest collections of original movie posters. The item "SOLARIS 1972 Amazing Polish poster Exc condition Andrei Tarkovsky filmartgallery" is in sale since Sunday, September 16, 2018.

This item is in the category "Entertainment Memorabilia\Movie Memorabilia\Posters\Originals-International\1970-79". The seller is "filmartgallery" and is located in Los Angeles, California. This item can be shipped worldwide.