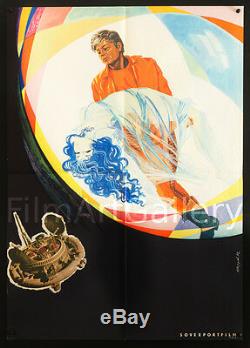 Original 22.5" x 32" inch Soviet Export film poster for the classic 1972 film SOLARIS directed by Andrei Tarkovski/Tarkovsky. In the decades since its premiere, this cerebral science fiction drama has achieved an enormous following and its stature among fans and critics alike has continued to grow. SOLARIS premiered at the 1972 Cannes Film Festival, where it won the Grand Prix Spécial du Jury and was nominated for the Palme d'Or. It was quite successful in the USSR after its Moscow premiere in February 1973 and the film played continuously throughout the Soviet Republic for a number of years. Like most Soviet films of its era (the vast majority of which were never released in the West), distribution beyond the USSR was spotty, and even in countries where it was shown, the release was often small, delayed by several years and the film subject to editing at the hands of the local distributor. It took years for many fans to find the film, often via re-releases or on home video. Original release posters for the film are therefore highly prized and widely collated. This particular poster was printed in the USSR (see the text "Sovexportfilm" at lower border) and intended to be used when the movie was shown in other countries. Depending on the country/region, the title and credits would be over-printed (we have seen Spanish, English and French-language variations).

Condition is very fine, folded with minor fold and edge wear but no signs of having been used/posted. NOTE: PLEASE IGNORE THE MAGNETS IN THE CORNERS: THEY ARE USED DURING THE PHOTOGRAPHIC PROCESS AND AREN'T PUSHPINS, HOLES OR A DESIGN ELEMENT.

PLEASE SEE OUR OTHER AUCTIONS AND STORE ITEMS FOR COOL MOVIE POSTERS. It must come back in the same condition as it was sent. FILM/ART has one of the finest collections of original movie posters. The item "SOLARIS 1972 Orig! USSR Russian poster Andrei Tarkovski Tarkovsky filmartgallery" is in sale since Wednesday, March 8, 2017. This item is in the category "Entertainment Memorabilia\Movie Memorabilia\Posters\Originals-International\1970-79". The seller is "filmartgallery" and is located in Los Angeles, California. This item can be shipped worldwide.