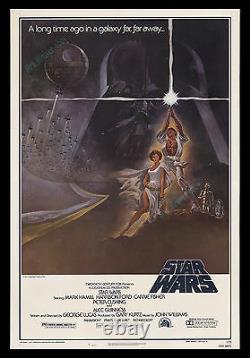 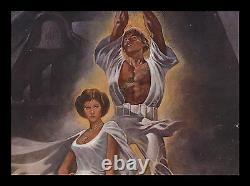 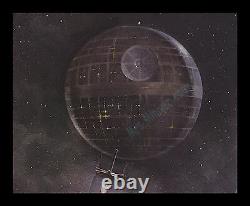 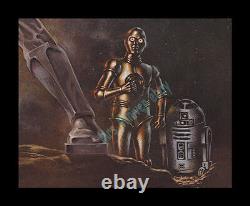 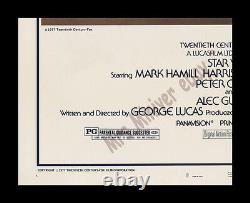 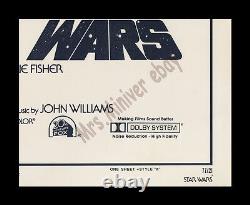 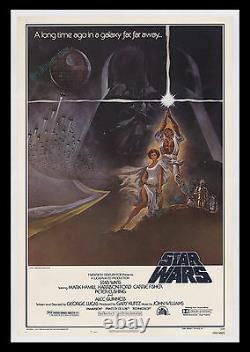 When I say, "ACTUALLY PRINTED, " I mean just that. One of the most forwarded misnomers is that the 77/21-0 NSS number in the right hand corner means it was the first printing. That's BUNK, and that's a fact! This grossly popularized misinformation came from the grossly inaccurate "Star Wars Checklist Poster" published by Killian Enterprises back in the mid 1980's. The poster is simply wrong on that account and on a lot of other ridiculously inaccurate assertions.

Heck, they list posters on that checklist that weren't even produced, and so discount any info on that early collector's edition , as i t was assembled by amateurs who were only looking to make a buck. How do I know all of this? I was the worlds leading expert on Star Wars posters when that "checklist" was published, and I've since increased my bank of knowledge exponentially. No other dealer in the world can say or has done that. I've seen it all, and what I know is that the 77/21-0 posters (and I'm NOT talking about the bootlegs - I'll get into that later) were continually reprinted by the studio until the early 1980's.

So to claim it's a "first" printing is outrageous. The truth of the matter is that the vast majority of the 77/21-0 style "A" one-sheets are NOT first printings, they're REPRINTS or re-orders. " Remember, Star Wars burst out as a sensation in 1977 and continued on its momentum until the early 1980's, and so "reprints were ordered in plenty! Additionally, the few that may have actually been printed "first" are likely to have been folded, as that was how NSS delivered them to the theaters in 1977. Also, keep in mind, "Star Wars" only opened in 32 theaters WORLDWIDE in 1977. They didn't print the large quantity of thousands right off the bat. The rolled 77/21-0 style "A" posters were mostly printed to sell to nostalgia dealers to satisfy the unprecedented demand by the wave of new poster collectors, many printed on the sly without 20th Century-Fox's authorization. This is a FACT, as I know several of the dealers who received large quantities of them in that capacity.

I've studied the posters against folded originals I got back in 1977 and they are indistinguishable to the naked eye under the closest inspection. They've become de facto originals because of this, but "first printings" they're NOT! Haven't you ever wondered why there are so many rolled 77/21-0 Star Wars s tyle "A" posters, when you can hardy find any other 1977 rolled poster?

That's the truth of it, and s o automatically become suspicious if a dealer claims it's a first printing. This 77/21 ROLLED Never-Folded original is IMPOSSIBLE-TO-FIND! 1977 Star Wars one-sheet posters are legitimately rare. This is one of them. Back in 1977, Star Wars was so successful that the style "A" one-sheet was printed in at least 6 different distinguishable versions. This version is one of the two rarest of the printings to find ROLLED! This Star Wars poster, with the National Screen Service code at the bottom that reads: 77/21 and has the words Star Wars underneath, was not issued rolled to theaters. The National Screen Service sent this version out to all the cinemas FOLDED. Only 20th Century-Fox executives and NSS (National Screen Service) employees had access to rolled originals, and so this IS A RARE ONE FOR CERTAIN , actually near impossible to get rolled!

Just try and find another one of these rolled anywhere else - you likely won't. This is a n elite poster to say the least!

DEALER INTEGRITY & THE DISTRIBUTION OF BOOTLEGS! "One-sheet, " or "1-Sheet, " is a printer's term for what's considered the "standard" poster size, which was 27x41 inches back in 1977.

This one-sheet has the NSS printing code 77/21, which is a bona fide 1977 original printing. This is clearly not one of those. I call those "the Energizer Bunnies of posters, " because they keep on coming and coming.... Nevertheless, I'm not going to go into all one-hundred and one different ways one can to tell an original style "A" poster from the fakes (I'll save that for my encyclopedia on posters), but I'll point out the three big issues of pressing concern to most educated collectors.

First - is the all important razor sharp GAU (Graphic Arts International) union stamp. You can check [X] that box (see photo #8). The logo must have even and thick Clear and Sharp lines that present clarity within the logo, because if it doesn't - it's a copy!

Second - would be the so-called hairy belt. It's actually a hair (below Luke's belt) that was caught in the duplication process when they photographed the original to bootleg it. It's one of the more famous bootleg's most telltale signs - but - I wouldn't solely rely on it. I've seen shaky people carefully scratch the "hair" off with a needle so it wouldn't photograph in their listings. I found out about that trick the hard way, when I bought one that appeared not to have the hair.

The truth is that they are just still furthering distribution of criminally made posters and distributing them throughout the hobby. It's wrong and dubious and in my opinion they should be stopped. I admit my prices are somewhat advanced, but the service and guarantee I provide is equally advanced. It more than makes up for what appears not to be a bargain price. I say, "appears" because it's my sincere belief that it's a bargain to be certain in what you're getting.

Certainty is what all the fuss is about when it comes to certifications on autographs, baseball cards, and comic books. It's what all three of those collectable industries solely rely on.

I'm a well-known expert. I fully designed and authored a Star Wars poster-collecting guide back in 1999 - It was published by Butterfields.

I'm credited in the front of the guide. I offer that guide with some of my listings see a photo of it in my listing with the. 1976 ORIGINAL Star Wars Corporation FLYER. I point this out because I want you to know that I can definitely authenticate Star Wars posters with 100% accuracy. THIS POSTER IS THE REAL DEAL.

Also, it's important to BEWARE of any dealer who advertises a Star Wars poster as a bootleg. These are greedy dealers who think it's OK to destroy the hobby by circulating bootlegs because they tell you upfront that it's a bootleg. They're knowingly distributing bootlegs for personal profit. It's criminal and unscrupulous. Some poster masterpiece sellers think it's OK because they say they stamp the back as fake.

It's again, distributing bootlegs knowingly. That's NOT integrity - that's BUNK! I wouldn't trust them unless they stamped the FRONT of the poster with a mark that clearly states, BOOTLEG! - like they do with fake coins and currencies in that well-established hobby. Help stop this criminality - speak out!

You can rest assured this GENUINE ORIGINAL 1977 printed beauty is an important poster to own, even if you are not a Star Wars collector. This one-sheet personifies "movie poster, " serving as a synonym for the format itself. This one-sheet is probably the most famous movie poster design of all.

Time, recognizable to nearly everyone on the planet. It's now been nearly 40 years since it was originally printed. As the years pass, it becomes harder and harder to acquire an authentic original, especially this more than rare ROLLED version!

CONDITION: This one-sheet is super clean. It was protected in a tube since 1977 and has recently been Archivally Museum Linen-mounted to flatten it and to. Smooth-out all the small defects from from it being handled early on in the 1970's.

It worked like a charm because the poster came out looking more than glorious! I used the best conservator in the USA.

He ONLY uses high-grade materials, such as thicker linen and thicker acid-free Japanese rice paper. The better materials cost more but make a real difference in the end result. It's flat as a pancake and as nice as can be. A finer Star Wars poster display would be hard to get. LINEN-MOUNTING is an accepted form of poster preservation by the Library of Congress and every Museum in the country.

A lot of advanced poster buyers request and prefer linen-mounted posters because it makes framing and displaying the posters much easier. Without the risk of damaging the original. The white you see in photo #9 - beyond that of the poster - is the white of the Japanese paper lining the linen border margin. You can see how easy it would be to damage the original poster without that extra margin of protection. The backing makes the poster much safer to handle - it GREATLY reduces the risk of damaging the original. Also, all of my linen-backed posters have been stored FLAT so they DO NOT have a curl to them - They're all ready for framing and display! If you're looking for an investment/museum quality item. Princess Leia Organa Peter Cushing.... Grand Moff Tarkin Alec Guinness.... Ben Obi-Wan Kenobi Anthony Daniels.... Darth Vader James Earl Jones.... It can crash regardless of any decision you make and can even crash regardless of any decision made by the company related to the stock - Leaving you with a near worthless piece of paper that won't inspire anyone! The magnificence of art and historic documents have an inherent value that relates to civilization and society.

Please write with any questions. If you're in the market for top quality original vintage movie posters or Star Wars, then please. The item "STAR WARS ACTUAL1977 PRINTED Style A 27x41 ROLLED NEVER-FOLDED MOVIE POSTER" is in sale since Tuesday, July 14, 2020. This item is in the category "Entertainment Memorabilia\Movie Memorabilia\Posters\Originals-United States\1970-79".

miniver" and is located in Studio City, California. This item can be shipped worldwide.