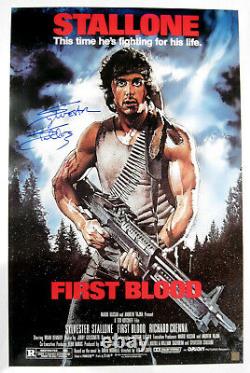 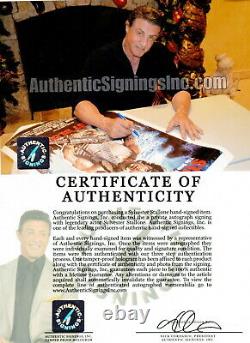 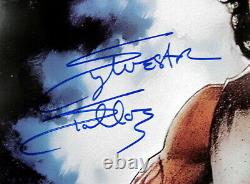 FROM THE ORIGINAL STUDIO PROVIDED NEGATIVE, A BEAUTIFUL CRYSTAL CLEAR MINT POSTER!! POSTER IS A LICENSED REPRINT BUT HAND SIGNED BY STALLONE!! RETAIL VALUE IS PRICELESS FOR ANY COLLECTOR!! AUTOGRAPHED IN FADE RESISTANT BLUE SHARPIE SO THIS WILL NEVER FADE!! Sylvester Stallone has established worldwide recognition as an actor, writer and director since he played the title role in his own screenplay of Rocky, which won the Academy Award in 1976 for Best Picture.

Grew to a franchise of five sequels and in 2006 Stallone concluded the series with Rocky Balboa. A critical and audience success which resolutely confirmed both Stallone and Rocky as iconic cultural symbols. In more recent times, Stallone wrote, directed and starred in Rambo, which continued the saga of Vietnam vet John Rambo twenty five years after the debut of Rambo: First Blood. Stallone then released his a most ambitious project , the action thriller The Expendables¸ which he has wrote, directed and starred in.

This makes Sylvester Stallone the only actor to open a Number One Film across Five Decades. During our private signings celebrities typically sign several of the same item and our listing photos are used to show general quality and placement of the autograph. All autographs will be slightly unique as they are hand-signed by each celebrity Buyers will not necessarily receive the exact autograph shown unless otherwise specified in description, but you can be assured of receiving an un-smudged, quality signature. This piece comes authenticated by Authentic Signings, Inc.

This item is in the category "Entertainment Memorabilia\Autographs-Original\Movies\Posters". The seller is "authenticsigningsinc" and is located in Beverly Hills, California.