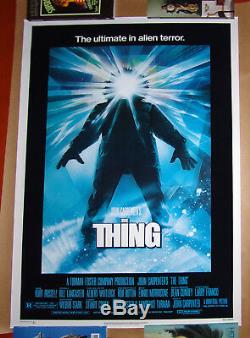 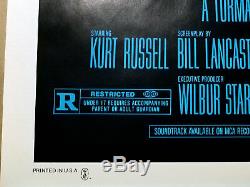 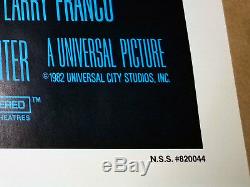 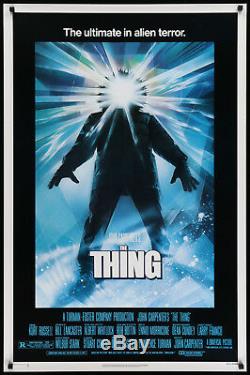 Original Movie Poster 27" x 41" Near Mint. There are 3 styles of this poster and all 3 are original first releases. The difference between them is only the placement of Kurt Russel's name and the text on bottom white border. On this poster, he is listed at lower left in a not very prominent position and there is no film title in the bottom border. On the other posters, he is listed separately on his own line and some of those posters have a title in the bottom border and some do not.

This poster style is the most wanted due to everything being centered. John Carpenter's The Thing, the 1982 John Carpenter horror science fiction (sci-fi) thriller The Ultimate in Alien Terror. "; "Man is the warmest place to hide. "; set in Antarctica; "Based on the story'Who Goes There?

"; it is a re-make of the 1951 movie, "The Thing from Another World", based on the same story, and with James Arness as "The Thing starring Kurt Russell, Wilford Brimley, T. Carter, David Clennon, Keith David, Richard Masur, and Donald Moffat. This is one of Carpenter's best movies, and in many ways it is more enjoyable and superior to the original version! The item "The Thing (Universal, 1982) Original Movie Poster 27 x 41 Near Mint" is in sale since Wednesday, June 13, 2018. This item is in the category "Entertainment Memorabilia\Movie Memorabilia\Posters\Originals-United States\1980-89".

The seller is "model_it" and is located in Beverly Hills, California. This item can be shipped to United States.