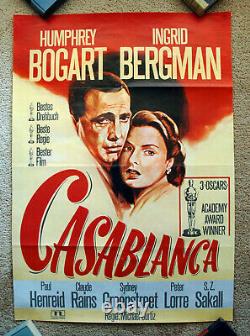 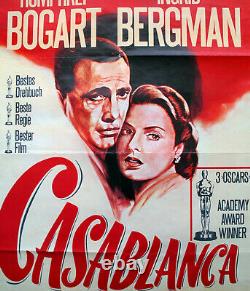 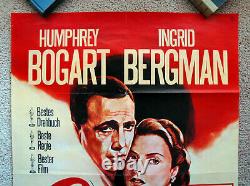 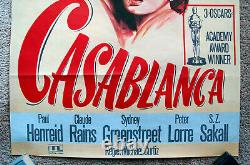 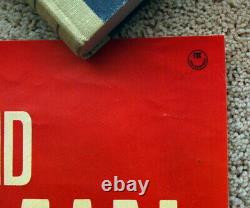 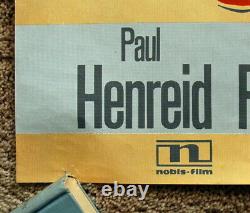 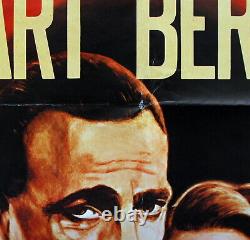 This is a Vintage Original 1970s. Movie Poster - starring Humphrey Bogart & Ingrid Bergman - It is not a reprint or reproduction. It is in great condition! Measures 22 3/8 x 33 inches. Edges and corners are generally sharp.

Some fold wear, as shown. No tears, tape or pin holes (please see photos). This is a vintage poster of one of the best movies every made! Casablanca is a 1942 American romantic drama film directed by Michael Curtiz and based on Murray Burnett and Joan Alison's unproduced stage play Everybody Comes to Rick's.

The film stars Humphrey Bogart, Ingrid Bergman, and Paul Henreid; it also features Claude Rains, Conrad Veidt, Sydney Greenstreet, Peter Lorre, and Dooley Wilson. Set during World War II, it focuses on an American expatriate who must choose between his love for a woman and helping her Czech Resistance leader husband escape the Vichy-controlled city of Casablanca to continue his fight against the Nazis. Story editor Irene Diamond convinced producer Hal B. Brothers Julius and Philip G. Epstein were initially assigned to write the script. However, despite studio resistance, they left to work on Frank Capra's Why We Fight series early in 1942. Casey Robinson assisted with three weeks of rewrites, but his work would later go uncredited. Wallis chose Curtiz to direct the film after his first choice, William Wyler, became unavailable. Principal photography began on May 25, 1942, ending on August 3; the film was shot entirely at Warner Bros. Studios in Burbank, with the exception of one sequence at Van Nuys Airport in Van Nuys, Los Angeles. Although Casablanca was an A-list film with established stars and first-rate writers, no one involved with its production expected it to be anything out of the ordinary. It was just one of hundreds of pictures produced by Hollywood every year. Casablanca was rushed into release to take advantage of the publicity from the Allied invasion of North Africa a few weeks earlier. It had its world premiere on November 26, 1942, in New York City and was released nationally in the United States on January 23, 1943.

The film was a solid if unspectacular success in its initial run. Casablanca did account for three Academy Awards? Best Picture, Director (Curtiz) and Adapted Screenplay (the Epsteins and Koch)?

And gradually its reputation grew. Its lead characters, memorable lines, and pervasive theme song have all become iconic and the film consistently ranks near the top of lists of the greatest films in history. The item "Vintage Original 1970s CASABLANCA Movie Poster Bogart Ingrid Bergman art film" is in sale since Wednesday, January 1, 2020. This item is in the category "Entertainment Memorabilia\Movie Memorabilia\Posters\Originals-United States\1950-59". The seller is "fscozzari" and is located in Nipomo, California. This item can be shipped worldwide.